State of children’s rights in England 2017 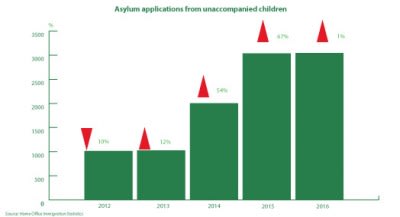 The Government has committed to a number of positive steps in 2017 to improve practice and policy to safeguard unaccompanied children, given the increase in numbers. However, longstanding concerns of the UN Committee have still not been addressed in relation to age assessments, child detention and the treatment of undocumented children. Family reunification for children both coming to, and already in, the UK was a key issue raised by the Human Rights Council in this year’s UPR and remains an ongoing concern. The UK’s forthcoming exit from the EU also raises worrying questions for children of European nationals living in the UK.

Where do we need to improve?

No durable solution for unaccompanied children

After a large increase in 2015, the numbers of unaccompanied children seeking asylum in the UK have remained high but stable: 3,290 in 2016 – a 1% increase on the previous year.