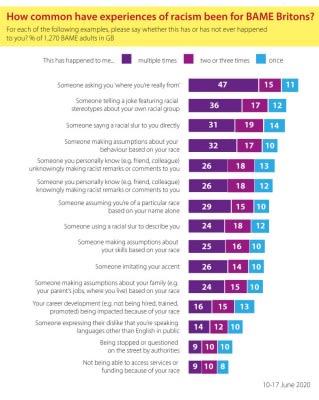 By Tanya Abraham, Associate Director of Political and Social Research

YouGov interviewed over 1,200 BAME Britons, including people from Black, Asian, Mixed and other non-White backgrounds, about issues of race today and in the past. Worrying results show that virtually identical numbers of people believe racism exists in the country today (84%) as believe it existed 30 years ago (86%). Not only does this figure show that the issue is a problem in the eyes of an overwhelming number of Britons from ethnic minorities, but also that it does not seem to be reducing over time.

However, there is a noticeable difference in severity; seven in ten (68%) think racism was present to ‘a great deal’ in UK society 30 years ago, and this has fallen to 47% today.

This suggests that the type of racism peo...