Public satisfaction with the NHS is high, but waiting times are the public’s priority 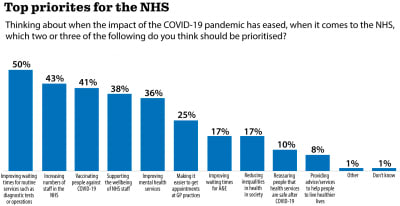 Latest findings from the Ipsos MORI UK KnowledgePanel show that over two in five expect the general standard of care to get better, and the public’s top priority for the NHS is improving waiting times.

New polling by Ipsos MORI, conducted ahead of a webinar co-hosted with the Health Foundation, shows that three-quarters of British adults say that Britain’s NHS is one of the best in the world (75% agree), while over six in ten UK adults say they are satisfied with the running of the NHS nowadays (63%).

As concern about the pandemic starts to decrease, over two in five people say that they think the standard of care provided by the NHS will get better over the next 12 months (44%), while a third think it will stay the same (35%), and fewer than one in five say it will get worse (17%). The proportion saying that they think it will get worse has decreased since May last year, when it was 25% (45% thought it would get better, while 27% thought it would stay the same).