A brief guide to the history of the NHS 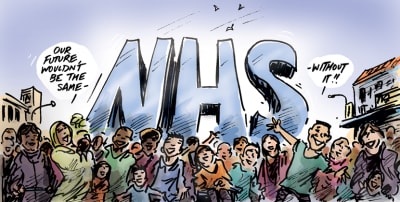 Founded to give free healthcare to all, the National Health Service is one of the UK’s most beloved institutions. But since it was founded in 1948, it’s faced a slew of demanding challenges, from ballooning costs to lethal epidemics.

Before the National Health Service (NHS) came into being, Britain’s healthcare – and the health of its people – left much to be desired. Pre-Second World War, infectious diseases including diphtheria and tuberculosis were rife, and infant mortality rates were high.

Healthcare was something of a postcode lottery, with those who lived near to institutions like large teaching hospitals in London most likely receiving a higher standard of care than people whose closest port of call was a cottage hospital with few beds. And, of course, people had to pay for their healthcare: in the 1930s, one doctor’s visit was approximately three shillings and sixpence – an eye-watering cost that even the middle classes struggled with.