Back to Topic
Topic Selected: Fertility and Reproduction 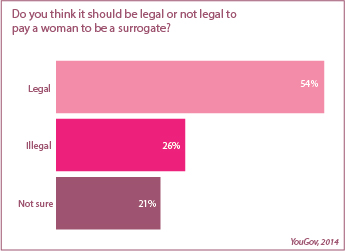 Most people in Britain approve of paid surrogate pregnancies – but public support is lower when it is used by gay couples.

Recently an Australian couple were accused of abandoning a child with Down’s syndrome and a heart condition with his surrogate mother in Thailand, while taking home to Australia the child’s healthy twin sister. The details of the case are murky – the surrogacy agent who arranged the deal claims the couple later offered to take the child – but the incident shed light on the issue of regulation in surrogacy.

Surrogacy itself, or the process of a ‘surrogate’ mother carrying a child for someone else, has been regulated under British law since the 1980s. In 1985, the Surrogacy Arrangements Act made commercial surrogacy – when the surrogate is paid a fee – prohibited, so surrogates in the UK must currently be volunteers (though they can be paid for reasonable expenses related to the surrogacy).