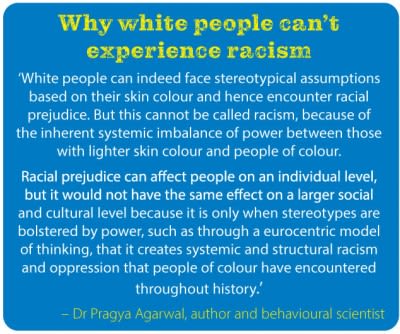 In its most simplistic definition, racism is prejudice or discrimination directed at someone of a different race – based on the belief that your own race is superior.

Taking this definition at its word, then, would suggest that it is possible for a person of any race to experience racism if someone treats them badly for this reason – even white people.

But this definition of racism leaves out one crucial element: The power structures that uphold and perpetuate racism.

Racism doesn’t exist in a vacuum. It exists within a hierarchical structure with power at its core. Racism only works because one group has power and other groups do not.

And it is white people who – historically, and in the West at least – hold the power when it comes to racial divides, thanks to centuries of Eurocentric beliefs and structures that continue to privilege and centre whiteness.

If an ethnic minority person treats a white person badly because of inh...