Children treated on adult mental health wards on the rise

This article is 7 years old. Click here to view the latest articles for this topic. 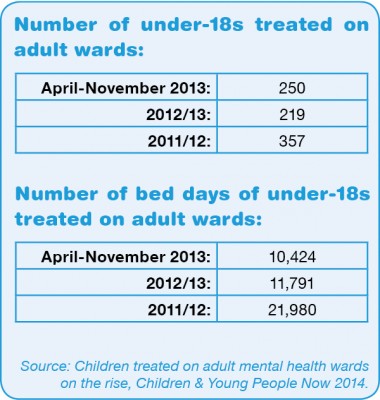 More children and young people have been treated on adult mental health wards in the first eight months of 2013/14 than the whole of the previous year, new data reveals.

Provisional data published yesterday by the Health and Social Care Information Centre (HSCIC) shows that between April and November 2013, 250 under-18s were recorded as spending time on adult mental health wards as a result of 303 admissions to hospital.

Under the Mental Health Act (2007) adult mental health wards are deemed to be inappropriate settings for treating under-18s, and a succession of government ministers have pledged over recent years to end their use for children and ...